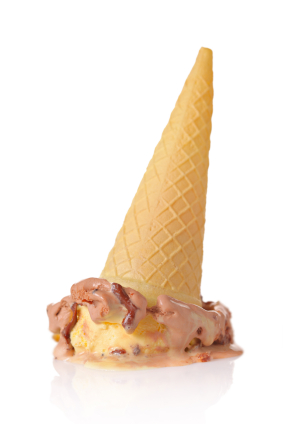 If you read my blog post titled My Humble Beginnings in Paradise, you already know that I spent 10 years in the Virgin Islands building an ice cream distributorship with my older brother John and my younger brother Michael. Every year, as hurricane season approaches, I’m reminded of how Michael and I went through two of them that completely decimated our business. Hugo in 1989 and Marilyn in 1995.

At the end of this post, there is a video with some pretty intense footage from both hurricanes. Hugo hit the Virgin Islands with such force (category 5), that our house was without electricity for 4 months. Yup, 4 long months of filling our little generator with gas when we got home from sweating our @%* off at work. The generator would run out of gas at about 3am, the fans would shut off, the temperature would go from 78 to 90 and the mosquitoes would start biting. Ahh, life in paradise

We lost everything, except our ice cream truck and my pick up truck. As you’ll see in the video below, I had an old GMC Sierra, and it was crushed by a huge tree that came to rest on top of it. We weren’t able to leave our house for 4 days after the hurricane because the roads were all blocked by debris. Incredibly, after we cut the tree off the truck, it sprang up and ran (another thing you’ll see in the video)! Once we did, we headed to our “warehouse”, which wasn’t really a warehouse, but a big, old Flavorich side loader truck that warehoused our inventory. When we got there, it smelled like rotten ice cream and it was really, really disgusting. Sticky, melted ice cream dripping out of the door seals.

Unfortunately, we couldn’t afford to have someone else clean it, so I had to jump in the maggot infested compartments and power spray it clean. Another little “visual” that has managed to stick with me to this day. John, who was living in Puerto Rico at the time, flew his airplane to St. Thomas and rescued us. We spent a few days in PR getting fed and cleaned up before we headed back to rebuild. John told us he had to freeze our salaries. We had no insurance and took a big hit with our inventory loss. We had to go on an “expense only” allowance where we were reimbursed when we presented receipts. Which basically meant we got to eat food and pay the rent. That was it. This lasted for 3 months while we built the business back up.

We slept very little given the conditions, and it took a while for the island stores to get back up to speed. Those were tough days. We really wanted to quit…but hung in there. In 1995, our business was going great. We had built a walk-in freezer in St. Thomas, and had expanded to St. Croix, St. John and the big island of Puerto Rico. Our sales had increased 5 fold. Then the “little” hurricane called Marilyn decided to pay us a visit. By the time Marilyn hit in 1995, I was married to Amy and had a 5 year old baby girl named Chelsea. We lived on Mt. Top, which was about as high up on St. Thomas as you could get. Not a good place to be during a hurricane. We had taken in Amy’s dad, “the Bear” who had a brain injury and incapable of taking care of himself.

We also took in Thad, who was an 18 year old kid who needed help. He worked for us on the delivery truck. During the same week, Amy’s brother Josh was paying a visit. We had a full house of 6 plus the cats and dogs. Marylin was supposed to be a minor hurricane. But it turned out to be a monster. Much worse than Hugo, even though it was a category 3. Which was a joke, because I went through both of them, and Marilyn hit us squarely and brutally. We had been through many small hurricanes, so we were all excited in that weird way you get when you know a storm is approaching. Although I must say, having been through 2 major ones, I no longer get excited about any storm. We fell asleep around midnight, only to be awakened by vicious winds. Things started slamming up against the house making really loud noises. Josh grabbed a flashlight since it was pitch black inside the house, pointed it at the ceiling and I asked “is that sky”? Josh said “yes, that’s sky”!!

Realizing that the roof was ripping off (our landlord said it was supposed to withstand category 5 winds…ha) we rushed to the bathroom, which seemed to be the safest room. All 6 of us in a bathroom that was tiny – 6 feet by 3 feet at most. For 5 grueling hours, we wondered if we were going to survive. Again, the damage was so severe, it took 4 months to get electricity back to our home. Again, the generators, the mosquitoes, and this time around, grandpa bear asking every 5 minutes, “when is 60 minutes coming on the TV?”

Needless to say, there was no cable or TV for that matter… We were barely able to save our inventory. Having gone through Hugo, we were smart enough to buy an old, used generator on the cheap. It worked, but was leaking water and had to be refilled hourly. This was brutal…..pouring water in the radiator, diesel in the tank in 90 degree plus weather. We did have a freezer though, and it managed to hold, which was a plus in our life. No need to clean melted ice cream this time. I guess I wrote this post to let you know that even when things get really tough, they are temporary. You keep plowing through and good things will turn around. Today, the distribution business we built sells a combined $15 million a year with 20 routes. Watch the video below to see some pretty cool footage.